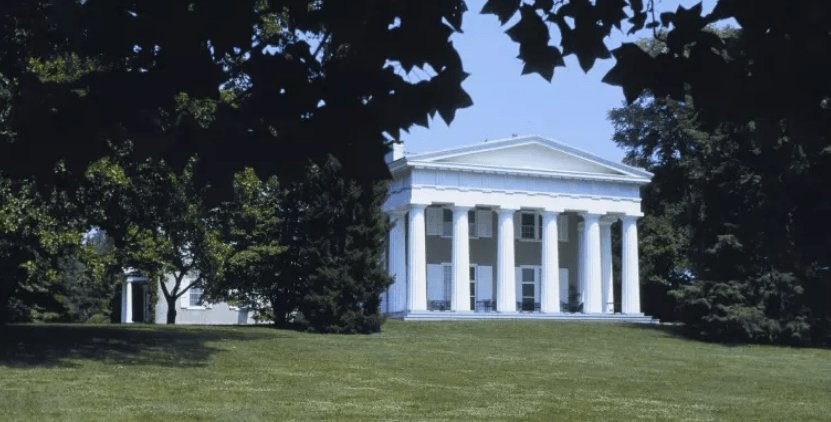 From fields that echo with George Washington’s orders to a historic hotel with Grover Cleveland’s favorite suite, Bucks County is filled with artifacts and places bearing traces of former U.S. Presidents. In this three-day itinerary, delve into the past and follow the footsteps of our nation’s commanders through parks, museums, estates, inns and shrines.

If you are sharing your journey on social media? Don’t forget to use #GeorgeSleptHere as you’ll find he made strategic use of much of Bucks County’s land and lodging.

Bristol
Begin your day with a visit to one of several impressive mansions along the Delaware River. The historic Andalusia is a two-hundred-year-old estate and former country home of Nicholas Biddle. Take a tour of the Big House and gardens that John Quincy Adams once visited.

Hartsville
Travel back in time to The Moland House, one of General George Washington’s former headquarters where he and his 11 thousand troops were stationed in 1777 as they awaited information of a nearby British Fleet. Take a guided tour of the house and a self-guided tour of the nature trail that weaves through Moland Park’s 12 acres.

Morrisville
Next stop by Summerseat in Morrisville. This former estate of Thomas Barclay was George Washington’s headquarters from December 8-14, 1776, before his famous Christmas Night Crossing of the Delaware River. It is also the only home in America to be owned by two signers of the Declaration of Independence: Robert Morris and George Clymer.

New Hope
The perfect place to end your day is the beautiful Wedgwood Inn in New Hope. This Victorian Bed and Breakfast sits on a park-like setting just steps from the heart of town. It once served as a campsite for George Washington and more than one thousand Continental soldiers.

Washington Crossing
Make your first stop Washington Crossing Historic Park, the spot marking a major turning point of the American Revolution when General George Washington and the Continental Army crossed the Delaware River on Christmas night in 1776. Explore the history of the 500-acre park nestled along the Delaware River. Visit the historic buildings of Taylorsville, including the Durham Boat Barn which holds the only replicas in the world of the boats used by Washington and his troops to cross the river. You can also climb the 125 feet of Bowman’s Hill Tower for a breathtaking 14-mile view of Bucks County’s countryside. This tower commemorates a point that is rumored to be one of Washington’s lookouts.

Next grab lunch at the Washington Crossing Inn, a historic eatery that adjoins the spot where Washington and his troops assembled before the historic crossing of the Delaware River in 1776. It is likely that Washington dined here before the crossing and the Hessian officers captured during the battle were imprisoned here.

Lumberville
Follow your busy day with a relaxing stay at the Black Bass Hotel in Lumberville. Grab a dinner table overlooking the Delaware River in this inn that dates back to the 1740s. George Washington attempted to stay here as Commander-in-Chief of the Continental Army but was turned away by the innkeeper who was a loyalist to the British Crown. Book a stay in Grover Cleveland’s favorite suite which is now named after him. Many of the furnishings are the same as when he slept here!

Doylestown
In the morning, head to Doylestown where you’ll find the Bucks County Civil War Museum. Brimming with historic documents and artifacts, the museum also boasts a rare collection of Abraham Lincoln pieces, including the Lincoln life mask, a bronze sculpture cast from a mold of the president’s face early in his presidency.

Only a short drive away is the National Shrine of Our Lady of Czestochwa. This Polish-American Roman Catholic Shrine founded in 1953 has been visited by numerous presidents including Lyndon B. Johnson, Ronald Reagan and George H. W. Bush.

Perkasie
Next, drive north towards Dublin, then into Perkasie to visit the Pearl S. Buck House, the former home of Pulitzer-Prize winning author, writer and humanitarian Pearl S. Buck. She’s the author of “The Kennedy Women” and she was referred to as the “bridge between the civilizations of East and West” by Richard Nixon. Here you can also see gifts and letters from Nixon, John F. Kennedy, and Eleanor Roosevelt.

Quakertown
Head to Quakertown to stop by Liberty Hall Circa 1772. This historic brick building is believed to be one of the overnight hiding spots for the Liberty Bell when it was on its way to Allentown to be hidden from the British on September 23, 1777. Traditionally the Liberty Bell would toll for the deaths of presidents.

End your day with dinner at McCoole’s at the Historic Red Lion Inn, a former meeting place for the organizers of the Fries Rebellion, one of three tax-related rebellions of the 18th century. John Fries, leader of the rebellion, was tried for treason and pardoned by John Adams in this same town.

*Info and photo courtesy of www.visitbuckscounty.com